I have decided that, rather than giving a lot of information here about places, I will make links so that those who are interested may learn more.

Unfortunately, our accommodation at Coventry, although comfortable, had a very strong smell of cigarette smoke. Even the towels smelled of smoke! Luckily, the windows opened! I was quite glad to leave. 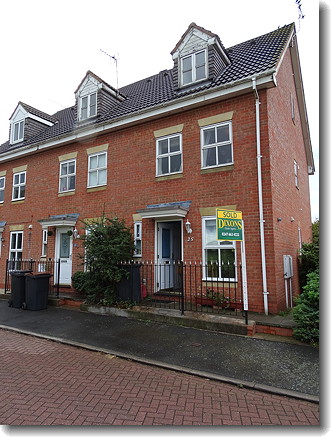 Gail's Place (on the right)

From Gail's Place, we headed towards Lichfield. Having found a parking place (a little more easily this time!) we walked off in the direction of the Cathedral. On the way we passed St.Mary's in the Market Square. 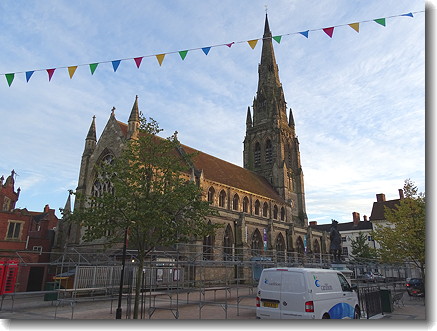 Sadly, only the left hand section (see roof) is used as a church any more. The rest is now the tourist information centre, a museum, and a cafe. It was strange when we entered the church part which was only the quire (including a three-manual pipe organ) and sanctuary of the old church. The organ must be VERY loud in that small space. Apparently, even that small part of the church is to be closed soon. 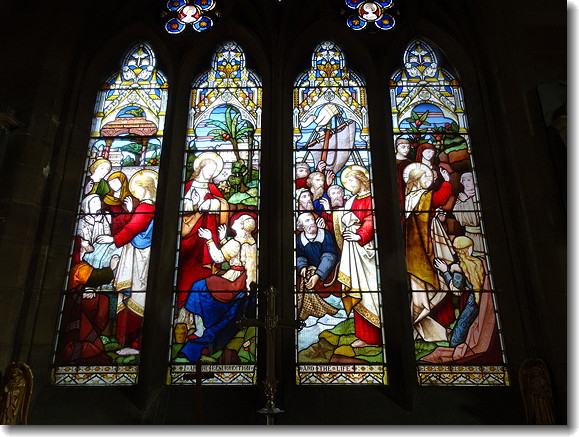 A window in St.Mary's

Lichfield Cathedral is located only a few minutes' walk from St.Mary's in the Market Square (probably why it has closed). There is a pond on the way with ducks. 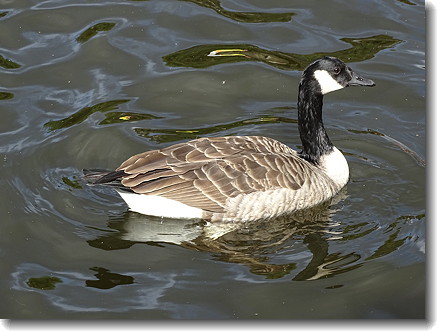 We think this is a "Canada Goose" 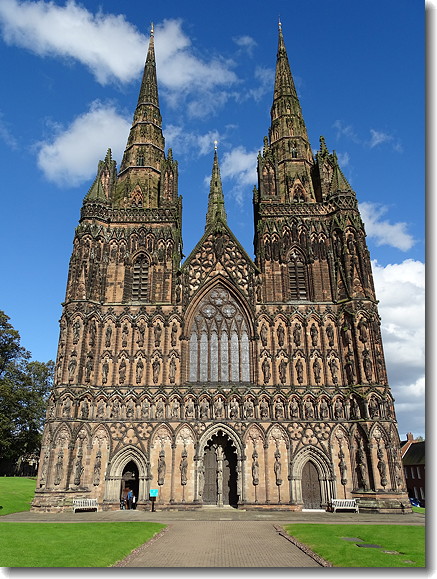 The large, ornate and very beautiful front of Lichfield Cathedral. Most of the statues are 19th century replacements of the medieval originals. 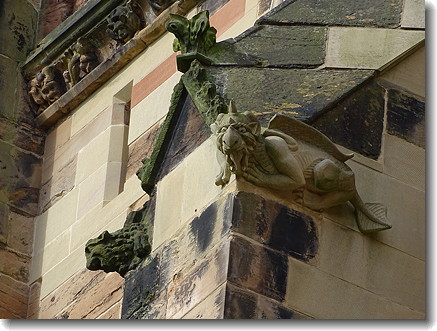 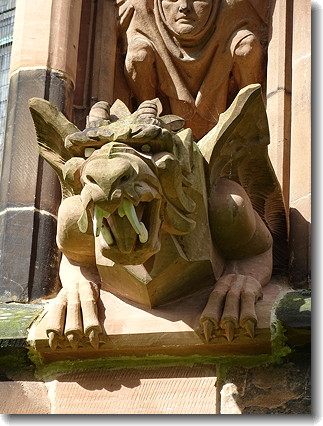 The purpose of gargoyles on cathedrals is to scare away evil spirits. This one even has teeth! 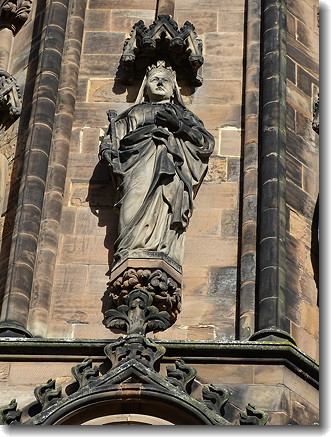 Among all the monarchs and saints on the front is Queen Victoria. She was carved by her daughter, Princess Louise. 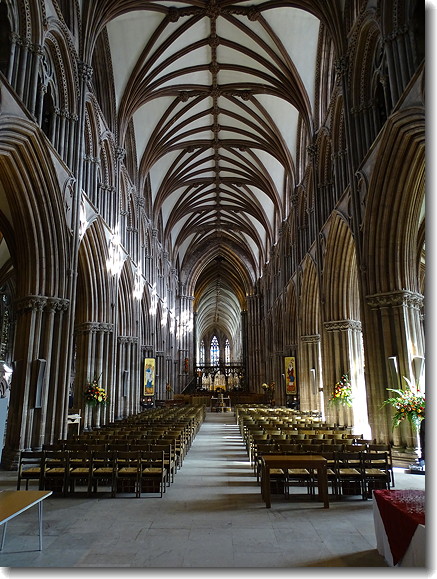 In this photo, you can see the whole length of the cathedral. If you look carefully, you will see that the portion of the cathedral beyond the screen is not quite in line. This is because the builders used the foundations of two earlier buildings which were not aligned. 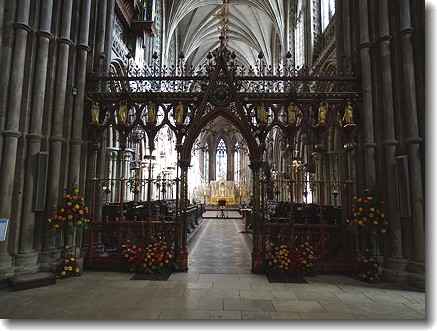 This screen, designed by Sir George Gilbert Scott, perhaps the most famous architect of the Victorian period, divides the nave from the quire. If you look carefully, you will see eight angels at the top. Each one is playing a different musical instrument. 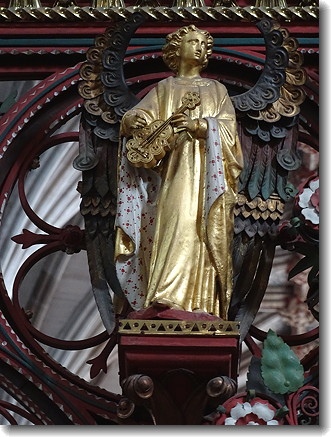 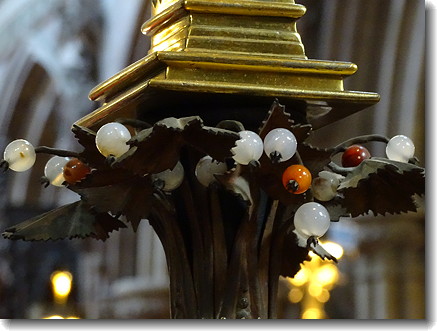 A detail of the screen showing some ornamental fruit. 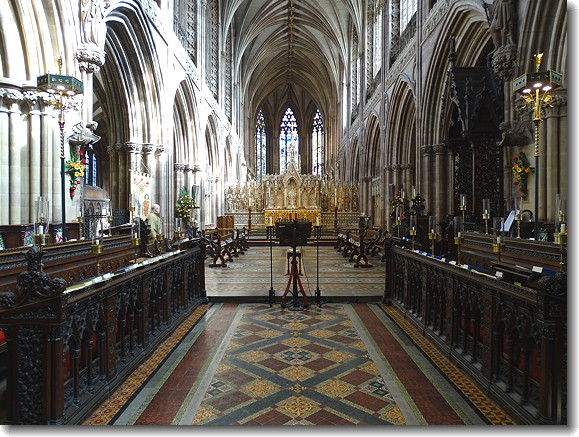 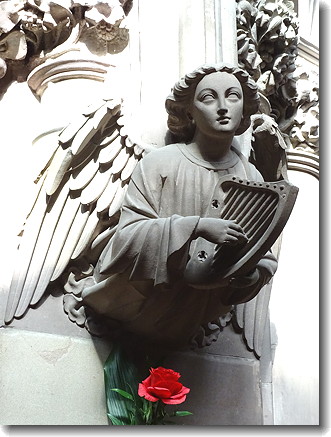 An angel above the Quire 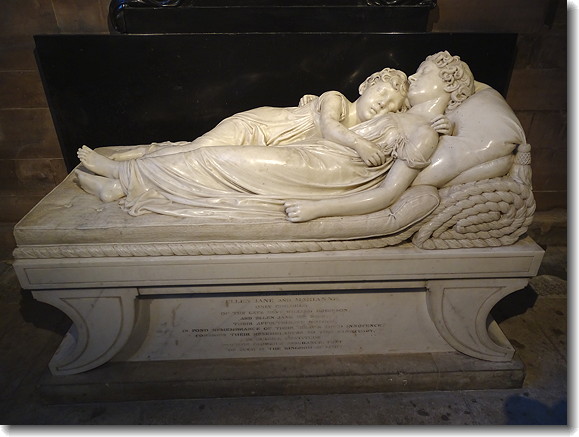 The Sleeping Children. The first died when she ventured into the snow to look for snowdrops for her sister. She is still holding them. The other died about a year later. 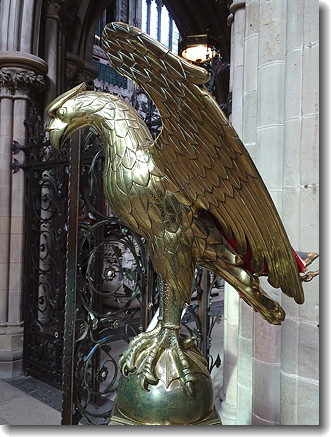 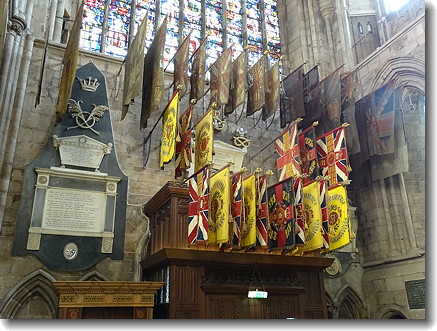 The Colours of various regiments are laid up in the Cathedral. Those at the top have been there so long that you can actually see right through them! 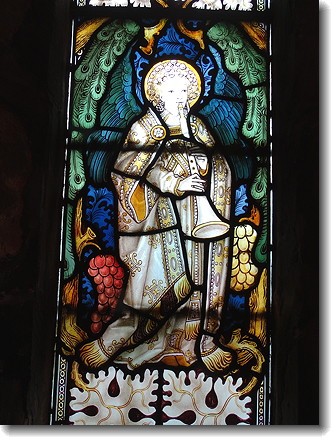 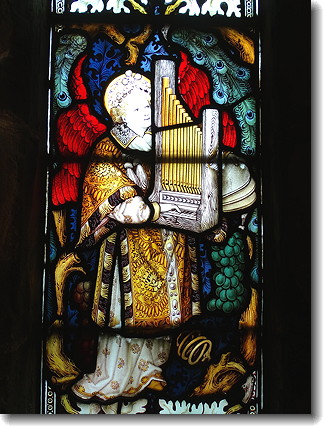 More references to music, this time in a side chapel 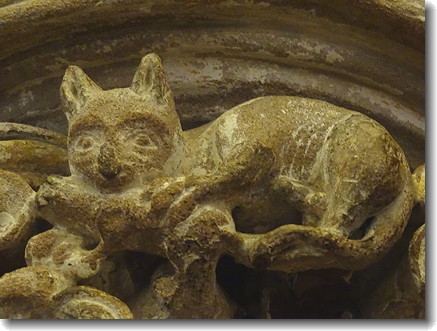 This carving of a cat with a rat in its mouth is located above the Dean's seat in the Chapter House. 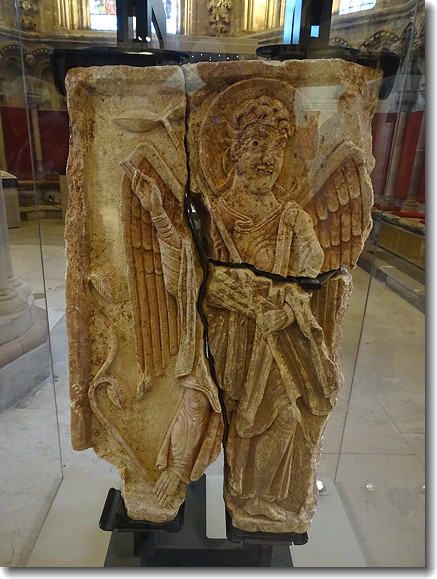 This portion of a sculpture depicting the Archangel Gabriel at the Annunciation was found in 2003 during construction of the Nave Altar platform, buried under the nave of the cathedral. It is from the 8th century. It is known as the Lichfield Angel. 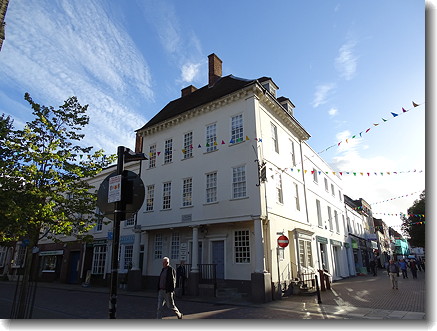 Also located in Lichfield is the birthplace of Dr Samuel Johnson, the writer of one of the first dictionaries. 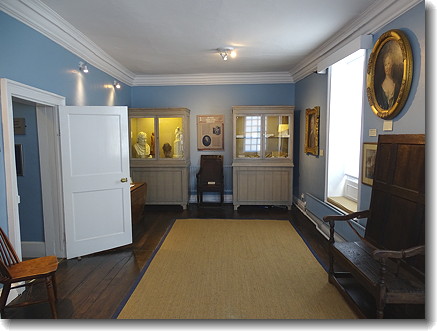 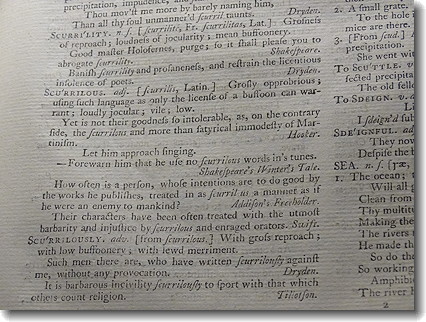 A page from Dr.Johnson's Dictionary

Those of you familiar with the TV series Blackadder will remember the time when Dr Johnson stayed overnight with Edmund. Baldrick, his servant, used the pages of Dr Johnson's newly-completed dictionary to start the fire! They stayed up all night trying to rewrite it. When they came to the letter "C", Baldrick added the meaning "big blue wobbly thing which mermaids live in"!

We returned to the Cathedral for Evensong. Again, we were allowed to sit in the Quire for the Service. The boys and men of the choir were present and the singing was of an excellent standard. The Preces and Responses were by William Byrd, the setting was Wood in D and the anthem Factum est silentium by Dering.

From Lichfield we travelled on to Exmoor Bed and Breakfast in Denstone, near Uttoxeter. This accommodation was very comfortable indeed and free of the smell of cigarettes! The cooked breakfast was just right.