Drat! We had to pack up and leave Cambridge in order to make our way back to Heathrow! Not fun! Oh well, all good things come to an end. At least we were not in a rush and could take our time. We left about 10:30am after fare-welling our hosts. It was quite sad as we are not likely to meet them again.

As we were travelling along the motorway, we saw a sign to "Melbourn" so, of course we had to go and have a look! It is a town of about 4,000 people and the church is really the only building of any particular note. 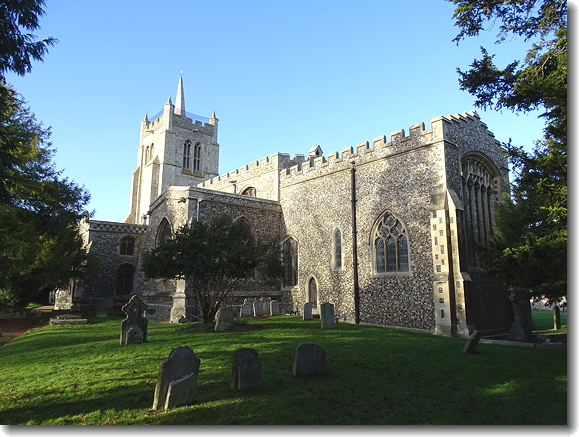 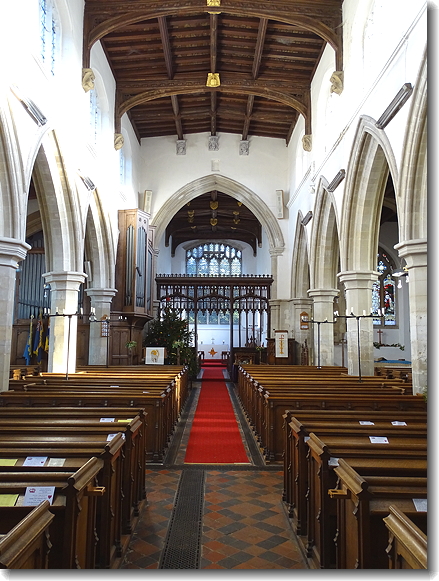 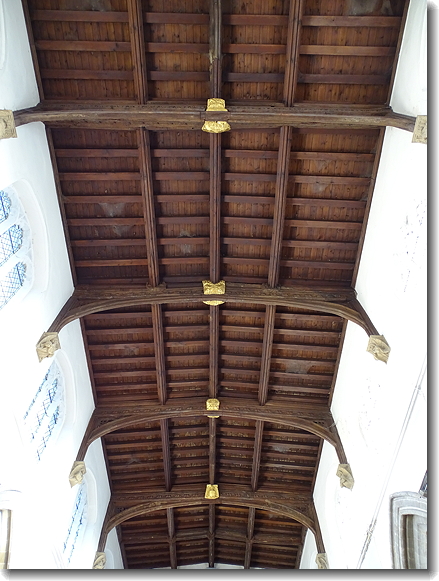 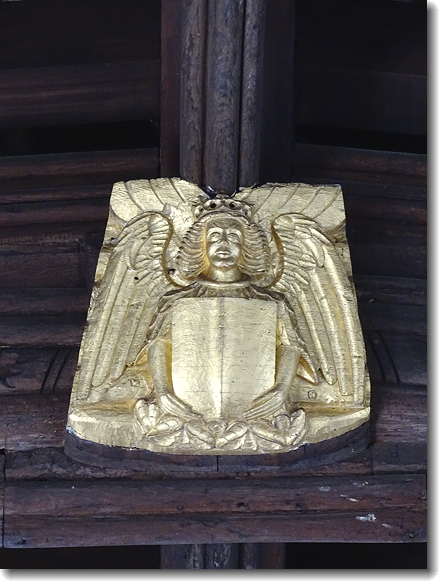 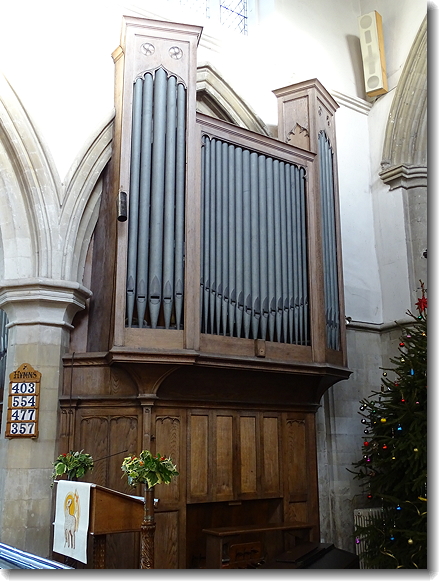 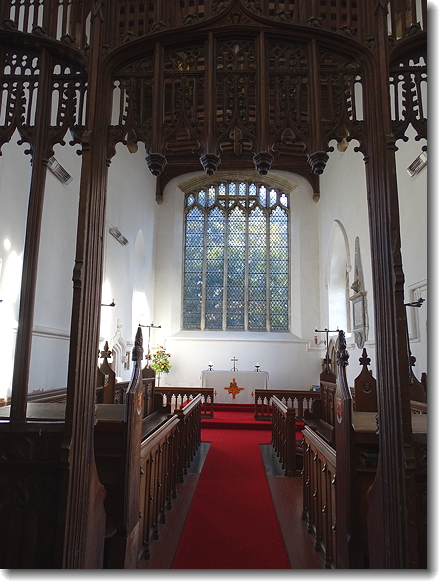 The Quire and Sanctuary 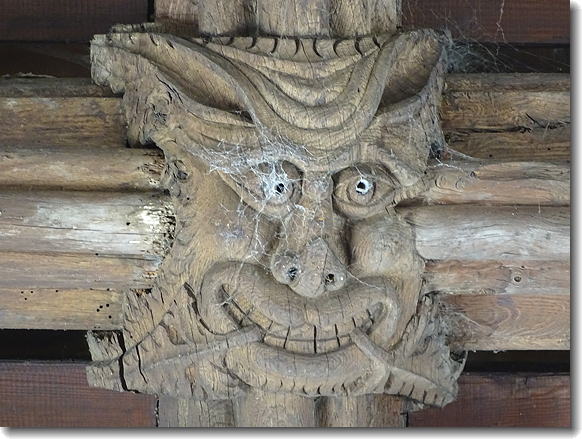 An impressive green man resides high on the ceiling (hence the cobwebs!) 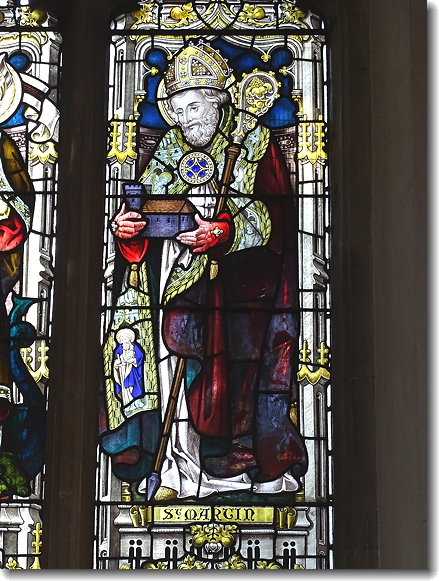 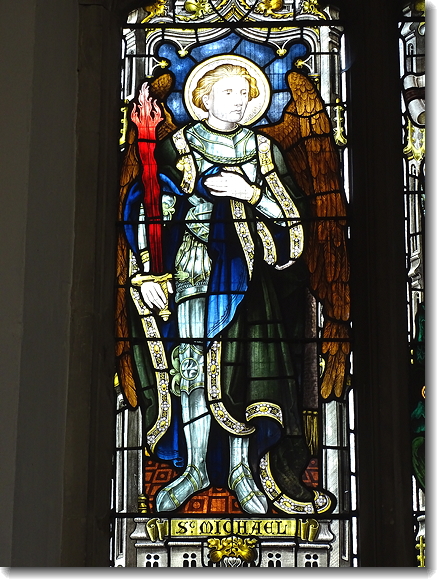 A little further down the motorway, there was a sign to "Baldock". We had to visit there too as the town shares its name with the vicar of the church I attend! Although this town is double the size of Melbourn, there was little to see apart from the Church. 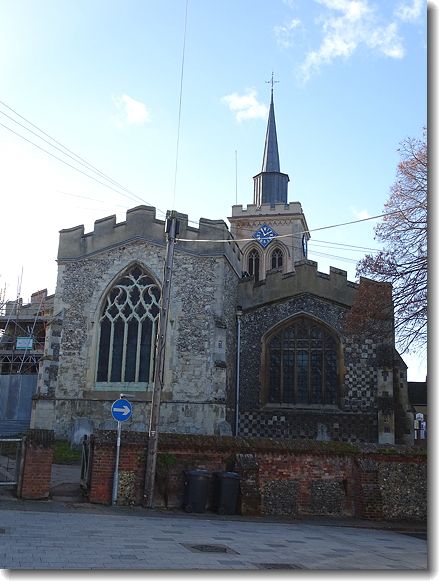 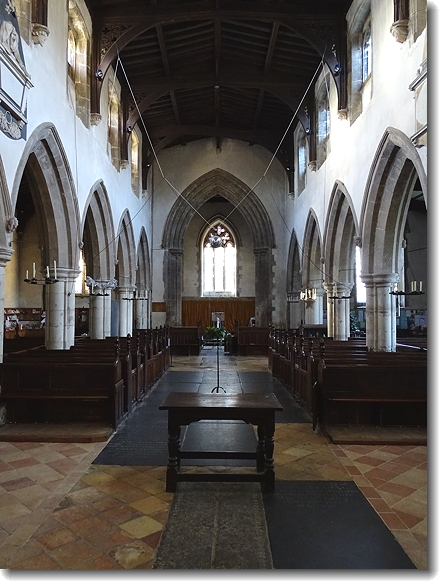 The Nave viewed from the screen. 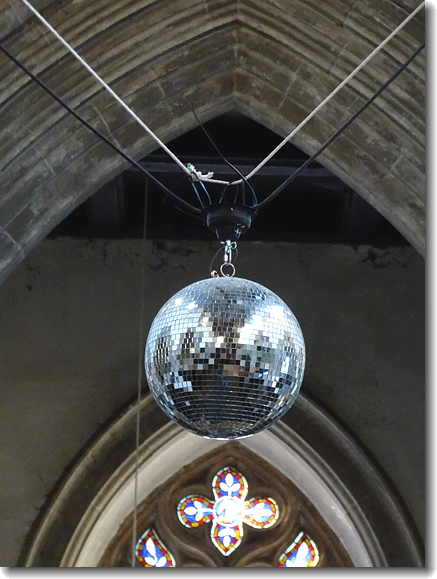 Always expect the unexpected when visiting churches and cathedrals! Did you notice the disco ball in the photo of the Nave above? Goodness knows why it is there!! 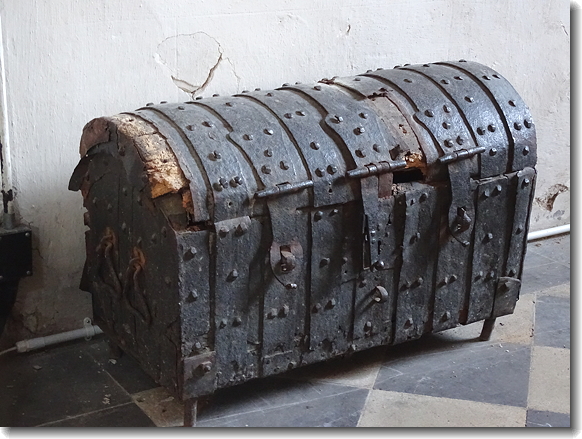 An ancient chest - note the three locks as is usual for these items - meaning that three people needed to be present to open them - a very sensible security check! 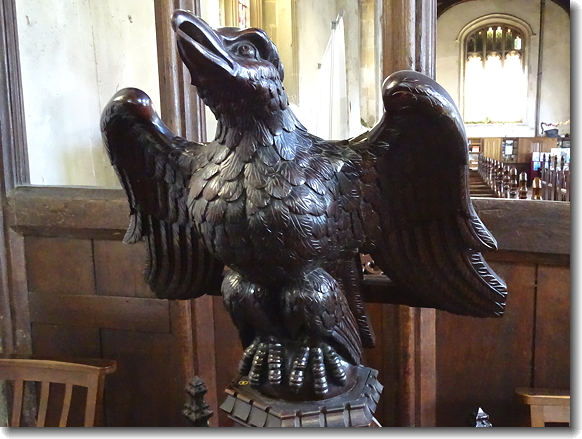 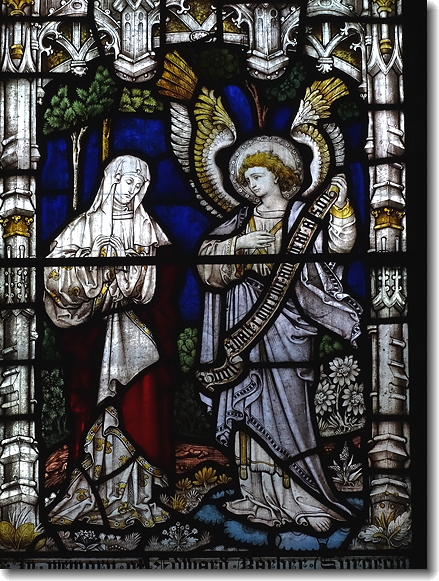 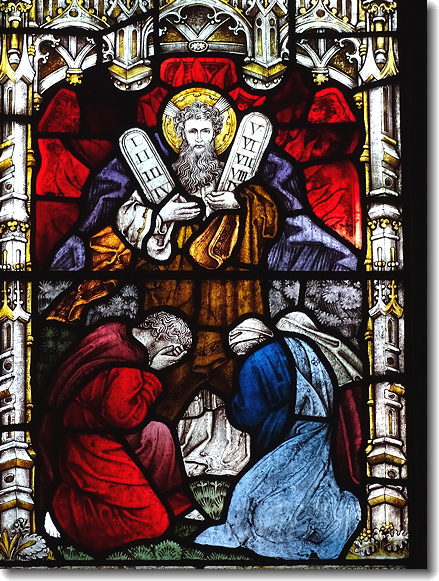 Moses returning to the Israelites having received the Ten Commandments from God. The people could not look at him because his face shone too much. 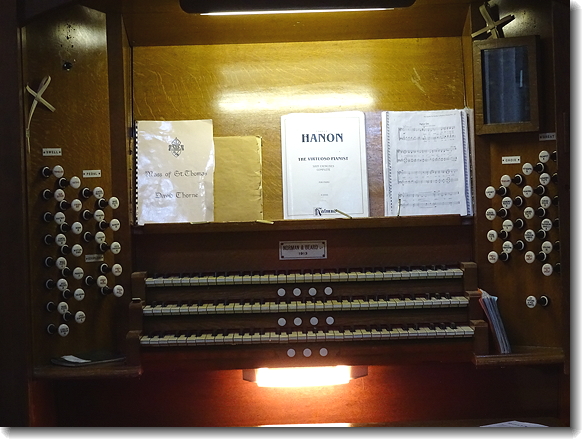 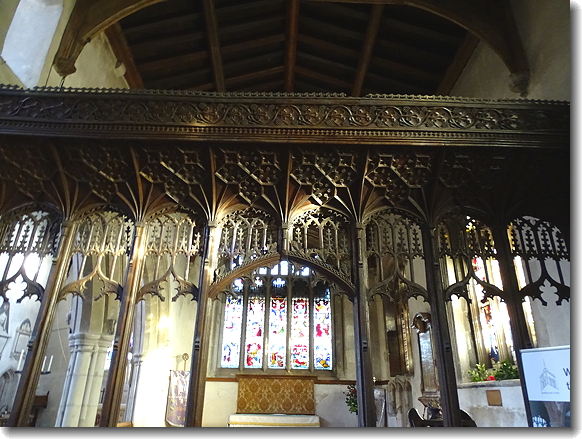 Detail of the Screen 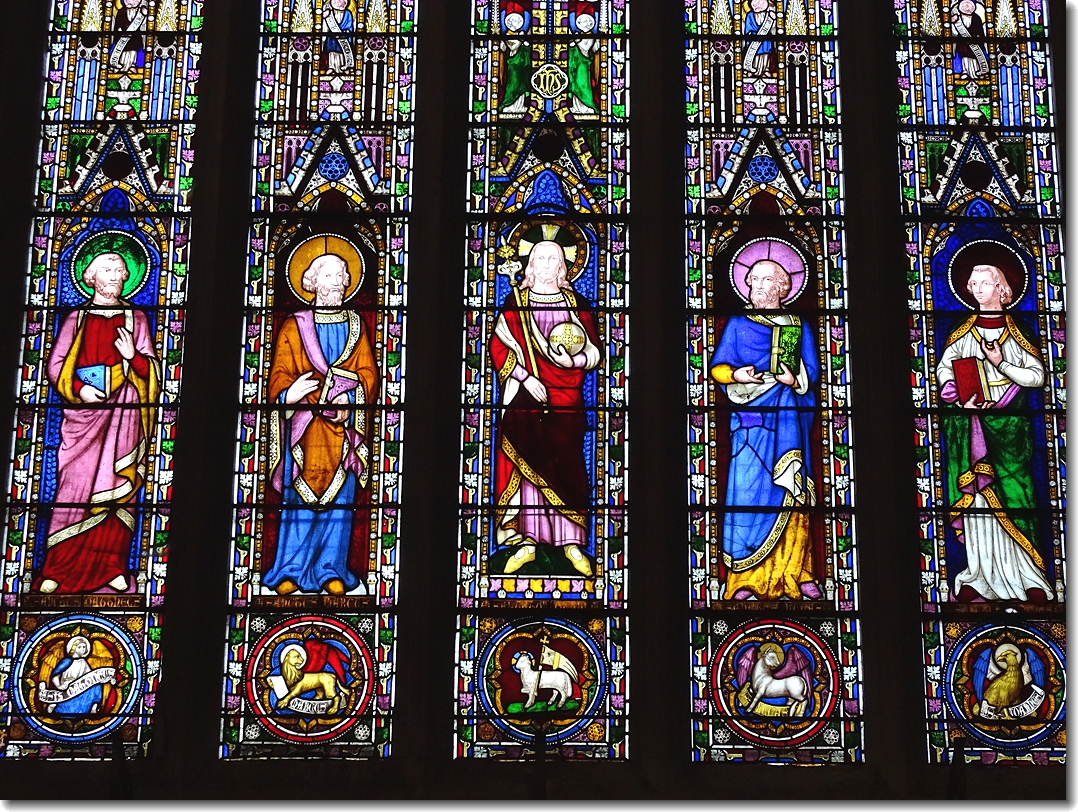 The East Window. From left to right: St.Matthew, St.Mark, Christ, St.Luke and St.John, with respective symbols underneath.

Even with both "Siri and Satoshi working on it, it was not easy to find the Hilton Hotel at Terminal 4 at Heathrow but the task was eventually achieved. The car was returned and we caught a taxi back to the Hotel. We briefly visited the restaurant to enquire if we needed to reserve a table for dinner. Having been advised that this was not necessary as it would be a quiet night, we went to our room for a bit of relaxation.

We decided to go back for dinner fairly early as we had to get up very early (5:00am!) the next day. There were several people in the restaurant already but we were soon seated at a table. Things went downhill from there. We had to almost trip up a waiter before we could order drinks. By the time we were attended to, we were ready to order our meals as well, and we did so. The drinks took an age to arrive and even then they got Satoshi's order wrong. As it had taken so long, we decided against asking for this to be rectified as we may have died from dehydration while we waited! Meanwhile, the restaurant had quickly filled. We watched as a lady was told that there was no table. A couple next to us offered to share their table with her but the waiter said no. Eventually, a table became available. The poor lady failed in her attempts to alert a waiter and went and sat down anyway! Having waited some time without being attended to, she got up and went to the register to order! Meanwhile, another couple went to the bar to get their drinks rather than wait to be served. Eventually, my soup arrived, which was pleasing except it was not only accompanied by Satoshi's main meal but mine as well! I suggested to the waitress that this was not really satisfactory. Her response was, "Sorry but you didn't order with me!" and promptly disappeared! No steak knife was provided with which to eat my steak. It took eleven minutes after we had finished eating before anyone came to clear the table. Soon after that, another waitress appeared and asked if everything was OK. We said that we were not happy with the service and explained why. Twenty minutes later the same lady came and asked the same thing again! By this point I was beginning to think we were in a Monty Python sketch! She seemed quite unmoved when I told her that she had already asked that question and we had said no. She asked if we wanted dessert and I said that, based on the previous experiences, we would probably be dead by the time it arrived so we would give it a miss and asked for the bill. The bill arrived with 10% "gratuity" already added. I let it be known that there was no way I would be giving a tip for the woeful service received, paid by cash and asked for a receipt. Well, that really caused an issue! We watched as two members of staff tried various buttons on the cash register. After about five minutes of fiddling around, a piece of paper was brought. This proved to be not a receipt but rather another bill! At least they had managed to remove the gratuity from it. This time, I went up to the register. Another member of staff arrived. Fortunately, this one seemed to have some idea of customer service and how to use a cash register. He was conciliatory and was able to produce a receipt. Not what one expects from the Hilton Hotel!

Back in our room, we did some last-minute sorting out of luggage - who would take what and what things could be left behind. Having done that, we retired for a (relativey by now) early night.